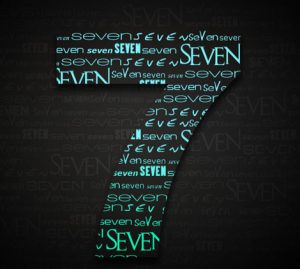 Before we tell this story, we want to make sure you all are totally aware of the significance of the number 7 in the Bible.  For one, the number 7 is used more than 700 times in the Bible, and if you include other variations, such as seven-fold or seventh, the number jumps to 860 times.

The first use of the number 7 in the Bible relates to the creation week in Genesis 1. God spends six days creating the heavens and the earth, and then rests on the seventh day. This is our template for the seven-day week, observed around the world to this day. The seventh day was to be “set apart” for Israel; the Sabbath was a holy day of rest (Deuteronomy 5:12).

Thus, right at the start of the Bible, the number 7 is identified with something being “finished” or “complete.” From then on, that association continues as 7 is often found in contexts involving completeness or divine perfection. We see the command for animals to be at least seven days old before being used for sacrifice (Exodus 22:30), the command for leprous Naaman to bathe in the Jordan River seven times to effect complete cleansing (2 Kings 5:10), and the command for Joshua to march around Jericho for seven days (and on the seventh day to make seven circuits) and for seven priests blow seven trumpets outside the city walls (Joshua 6:3–4). In these instances, 7 signifies a completion of some kind: a divine mandate is fulfilled.

Interestingly, man was created on the sixth day of creation. In some passages of the Bible, the number 6 is associated with mankind. In Revelation “the number of the beast” is called “the number of a man, and that number is 666” (Revelation 13:18). If God’s number is 7, then man’s is 6. Six always falls short of seven, just like “all have sinned and fall short of the glory of God” (Romans 3:23). Man is not God, just as 6 is not 7.

Sometimes, the symbolism of 7 is a great comfort to us: Jesus is the seven-fold “I AM” in the Gospel of John. Other times, it challenges us: Jesus told Peter to forgive a wrongdoer “seventy times seven” times (Matthew 18:22, NKJV). And then there are passages in which the number 7 is associated with God’s judgment: the seven bowls of the Great Tribulation, for example (Revelation 16:1), or God’s warning to Israel in Leviticus 26:18.

Speaking of the book of Revelation, the number 7 is used there more than fifty times in a variety of contexts: there are seven letters to seven churches in Asia and seven spirits before God’s throne (Revelation 1:4), seven golden lamp stands (1:12), seven stars in Christ’s right hand (1:16), seven seals of God’s judgment (5:1), seven angels with seven trumpets (8:2), etc. In all likelihood, the number 7 again represents completeness or totality: the seven churches represent the completeness of the body of Christ, the seven seals on the scroll represent the fullness of God’s punishment of a sinful earth, and so on. And, of course, the book of Revelation itself, with all its 7’s, is the capstone of God’s Word to man. With the book of Revelation, the Word was complete (Revelation 22:18).

Having said that, let me tell you why the number 7 is important to The LOT Project and why it’s important and special to me personally.  I tell this story because I know how selfish I can be.  Believe me when I tell you that, just ask Erin.  I can be very selfish at times.  For a long time now, since LOT has been in our lives, I often pray to God to keep my motives pure.  To help me NOT do this because I want to, but for me to keep doing this because IT IS THE WILL OF MY FATHER!!!  I pray this prayer A LOT!!!

Well, I believe my Father answered me…

A couple of months ago, I was in a mediation for work. I was with one of our corporate guys (Jason) and our attorney (Kirk).  While waiting on the mediator to come back to us, we were talking about whatever popped up.

Jason said, “Hey Billy, tell Kirk what you do… you know, with your ministry!”

At first, I must say that it felt very awkward, and I wasn’t sure what I was supposed to say.  We were at work, and I really don’t like talking about what “I” do, because honestly, “I” don’t do much.  GOD does A LOT!!!  Then, Erin pretty much does the rest.  But, I proceeded to tell Kirk all about the LOT Project.  He was very interested that we did this.

Jason even asked, “Billy, how do you hear and see that stuff and be able to push that to the aside to live your life?”

“Well, God has made this part of my life…but it is the HOPE in Christ that lives can and WILL be changed.  This is what keeps us going back.”

“Oh yea, you took over our account when he left your firm.”

“Do you know why he left?  He left to start an organization for Autism. His son has autism.”

Kirk says, “The reason I bring this up is that I have been thinking. Have you ever thought of making The LOT Project a 501c3 non-profit?”

I quickly replied, “Uhhh, no.  No, this is just something that my wife and I felt that God wanted us to do.  No, I don’t think… well, no, this is just a little thing we do.”

“You did say that it is much bigger than you imagined it would be.”

“It is definitely bigger,” I said, “but no, we have never thought about that.”

“I think you should consider it.  Matter of fact, if you don’t mind, I would like to send Steve Whitlow an email about helping you since he just did his last year.”

I replied, “Well, I’m sure that’s expensive, and we spend what little money we have on our friends at LOT.  But, I appreciate it.”

Kirk says, “No, don’t worry about that… let me email him.”

The topic was dropped.

About a week later, I receive an email from Steve telling me he wants to help.  I was STUNNED.  I was not really sure what was going on.  So, that’s when I went into PRAYER MODE.  I prayed, “God, not sure what you’re up to, but if this is a ‘YOU’ thing, then I’m leaving it up to YOU!!!  If YOU want this, then it will happen.”

Steve says, “Now, it’s a waiting game.  It will take anywhere to 3 to 6 months for you to get the decision.  It actually took me closer to 8 months to get mine.  I know it sounds like a long time, but be patient.  A few months from now you will get a letter, and if you get approved, then it will be retroactive to the date you filed the application.”

Back to the prayer closet…

This past Friday (May 6th), planning on spending a quiet evening at the house before our very busy weekend kicked off.  I walked out to get the mail and there were a few letters in the box along with the usual spam mail.  Once I got back inside, I went through them and there it was… a letter from the IRS.  Erin was sitting on the couch so I just kept my cool while I opened it.  I knew it was WAY TOO EARLY to get a decision, so my first thoughts were, “What did I do wrong?”

“We are pleased to inform you that you are approved for your 501c3 Non-Profit status.”

“We are celebrating… go get dressed.”

While Erin and I are waiting on our food, I unfold the letter and laid it on the table.  A HUGE grin comes on her face as she reads the first sentence.  The grin turns into a smile… and then all out excitement.

EXACTLY 7 days after the application was filed.  Not 6 months, not 3 months… but 7 days.

Now, folks, understand that we are talking about the IRS… the US Government… and it took 7 days for The LOT Project to get approved as a nonprofit.  Has the IRS or US government EVER moved that fast?

There were some tears shed at that table when we talked about the significance of the number 7 in the Bible and how GOD chose to answer my prayers.

It’s almost as if God was looking down on me that night saying, “OK, Billy… This should shut you up!  Now you can rest.”

I do feel like this was confirmation for me that we are on the right track… we are doing the right thing… we ARE in God’s will, and I needed to hear that.

God answered our prayers that night in the BIGGEST way possible by showing us just how powerful He is… God turned 6 months into 7 days.

But now, I feel our work has just begun.

The LOT Project is now a 501c3 nonprofit organization! Praise the LORD!